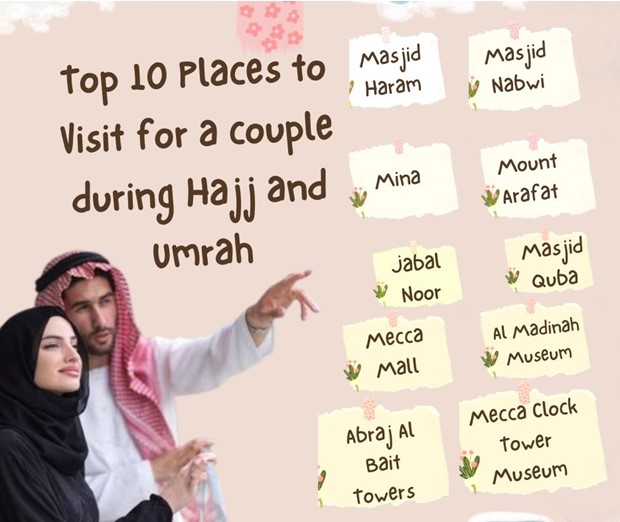 We know that performing a holy journey to Mecca is a great desire of all Muslims, whether they are men or women. After marriage, every couple wants to travel to wonderful tourist places to enjoy their honeymoon.

But Muslim couples prefer to perform Hajj and Umrah instead of travelling to other countries. They believe that performing both sacred pilgrimages is a great blessing for them from Allah Almighty. The title “10 Best Places for a Couple to Visit during Hajj and Umrah” covers the purpose of every Muslim couple when they visit Saudi Arabia. Aside from the honeymoon trip, couples visit Saudi Arabia frequently for spiritual rituals.

Umrah is a short and optional pilgrimage to seek blessings at any time throughout the year. In contrast, Hajj is an obligatory and long journey with additional rites that all Muslims should perform at least once in their lifetimes.

According to the policy of the Saudi government regarding tourism, pilgrims can perform Umrah and visit other cities of the country on an Umrah visa and a Visit visa. Hence, couples can also avail of this facility. Hajj is impossible without obtaining a Hajj visa.

With the beginning of the new-year, the booking of Hajj packages has started. Because Saudi Arabia has announced that this time the previous ban on Hajj will be lifted.

These are 10 best places:

The Grand Mosque of Mecca, also known as the Masjid Haram, encircles the Holy Kaaba, Safa and Marwa, Maqam Ibrahim, and Zamzam Well. Muslims offer their prayers to Allah Almighty while facing the Kaaba in the middle of the mosque, making it a significant site. It is the main location for performing the rituals of Hajj and Umrah.

Masjid Nabwi is the second-largest mosque in the world. It is also known as the Prophet’s Mosque. This mosque encircles the tomb of the last Prophet (Peace Be Upon Him) along with two other famous figures Abu Bakr (RA) and Umar (RA) and Riyad al-Juna. The foundation stone of this mosque was laid by the Holy Prophet (PBUH) himself.

Mina is a small town known as the City of Tents. Coming here during the days of Hajj, it will feel as if this is not a Mina, but we are in Las Vegas. Performing the stoning ritual here on Jammarat and experiencing animal sacrifice will be a lifetime memorable moment for a couple.

Mount Arafat is a granite hill in the Plain of Arafat, 20 km southeast of Mecca. It is also known as the “Mountain of Mercy”. Since Ibrahim (A.S.) intended to sacrifice his son Ismail (A.S.) on this hill, at that moment Allah sent a ram in place of his son. Prophet Muhammad (Peace Be Upon Him) delivered his last sermon at this place on the occasion of Hajj.

Jabal Noor (Mountain of Light) is one of the most famous and sacred mountains in the world. Its historical significance derives from the fact that the first five verses of the Holy Qur’an were revealed to the Prophet (Peace Be Upon Him) in a cave on the top of this hill on the borders of Mecca.

The Clock Towers are a collection of seven skyscraper hotels in Mecca, Saudi Arabia, that are owned by the government. With the King Abdul-Aziz Endowment Project, the city will be improved to better accommodate incoming pilgrims.

Masjid Quba is the first mosque in Islamic history that was built outside Madinah. It is the second-largest mosque in the holy city of Madinah. For centuries, Many Muslims visit it during Hajj and Umrah. This spiritual place is a very crowded scene during the holy month of Ramadan. According to many traditions, the reward of praying in this mosque is equal to performing Umrah.

One of the most popular malls in Saudi Arabia is Mecca Mall, which is renowned for carrying numerous high-end products. The two-story mall has stores, food courts, and a supermarket for groceries and other necessities. There are many restaurants in the mall, including Burger King, etc.

Although it may not be the largest mall in Mecca, it is home to some of the top retailers. Even products from lesser-known brands are of excellent quality.

The top four floors of Mecca Clock Tower (Abraj Al Bait Tower) are designated as a museum. The museum, which is located at the highest point in Mecca, is operated by the Misk Foundation, a non-profit organization that Crown Prince Muhammad bin Salman created. It has a variety of scientific and historical facts. A balcony with a broad view of the Grand Mosque (Masjid Haram) is also present.

The most important museum in Madinah, Al Madinah Museum, is home to ancient artefacts and archaeological collections that together reflect the history of this sacred city. The magnificent museum provides a glimpse into the rich Islamic culture.

Can tourists travel to Mecca?

There are strict regulations prohibiting non-Muslims from entering Mecca. One must first show identification proving their Muslim faith because it is the most sacred area in the religion. Foreign pilgrims are required to travel with a valid Umrah visa if they want to perform a holy journey to Mecca.

However, according to the Ministry of Hajj and Umrah, an individual or a couple, family or group can visit other cities of the Kingdom of Saudi Arabia on a visit visa, Umrah visa and Hajj visa. Now, it is the choice of the married couple whether to get a tourist visa or an Umrah visa while booking Umrah packages. This is great news for married couples, who wish to visit the whole of Saudi Arabia by performing Hajj and Umrah.

The majority of Muslims consider Hajj as an important pillar of Islam and an essential religious duty. Umrah is a short journey to the holy city of Mecca.

Every Muslim, male or female, has a strong desire to visit Mecca. After marriage, many Muslim couples go to Saudi Arabia to perform Hajj and Umrah instead of visiting other tourist destinations. Because they understand that there are many blessings and rewards in making a religious trip to Mecca. The couple visits various places during Umrah and Hajj, such as Masjid Haram and Masjid Nabawi, Mecca Clock Towers, Mount Arafat, and Masjid Quba etc.

Do I Need a Fan in My Grow Tent?

What is The Difference Between An Electric Wheelchair And a Power Wheelchair?